"Snow in the Suburbs" by Thomas Hardy 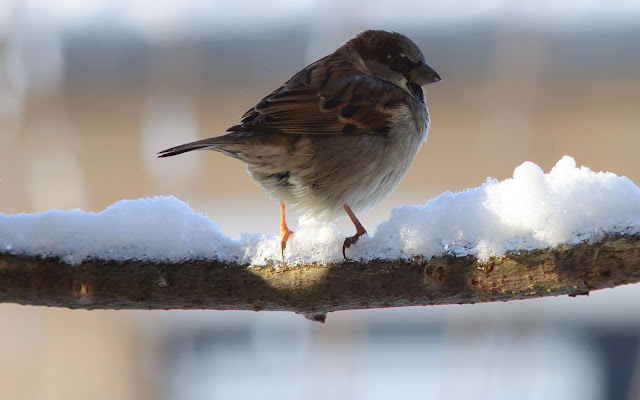 Every branch big with it,

Bent every twig with it;
Every fork like a white web-foot;
Every street and pavement mute:
Some flakes have lost their way, and grope back upward, when
Meeting those meandering down they turn and descend again.
The palings are glued together like a wall,
And there is no waft of wind with the fleecy fall.

A sparrow enters the trees,
Whereon immediately
A snow-lump thrice his own slight size
Descends on him and showers his head and eyes,
And overturns him,
And near inurns him,
And lights on a nether twig, when its brush
Starts off a volley of other lodging lumps with a rush.
The steps are a blanched slope,
Up which, with feeble hope,
A black cat comes, wide-eyed and thin:
And we take him in.

One of the most surprising things about Thomas Hardy's poetry is that, prolific as he was--his Collected Poems runs to nearly a thousand pages--he seldom if ever used the same metrical form twice. Here his words seem to float and drift and fly, just like the snow.

This poem appeared in Hardy's seventh collection, Human Shows, published in 1925 when he was 85. It was his last collection that he would see in print, but, after his death three years later, his literary executors--Florence Hardy and Sydney Cockerell--published "Winter Words", which contains some of Hardy's best loved poems ('Proud Songsters' is a special favorite of mine.)

Few poets in any language have done some of their finest work in their ninth decade, as Hardy did.